Now extinct in the wild, this is the world’s smallest waterlily, with pads as little as 1cm wide. In 2008 it disappeared from the one location it used to grow wild, a patch of thermal spring just a few square metres in size in Mashyuza, Rwanda. We’re protecting its seeds in the MSB, plus today Kew is the only place in the world where it is propagated regularly and in large quantities

The world’s smallest waterlily has a grand story.

In 1987, Professor Eberhard Fischer, a German botanist, discovered it growing in its native thermal spring in Mashyuza, Rwanda. He saw it was at serious risk and sent some specimens to Bonn Botanic Gardens, who, as part of a conservation exchange, sent some on to Kew in 2009.

By this point the lily was extinct in the wild due to over-exploitation of its fragile habitat. We secured its seeds in the MSB, and experts at Bonn and Kew set to work trying to keep a handful of pre-germinated seedlings alive in our nurseries.

To begin with, both botanic gardens were struggling to keep this little lily going, with its seedlings barely clinging to life. Then Kew’s Carlos Magdalena, renowned for bringing the rarest and most difficult plants back from the brink, took on the challenge.

In November 2009, after months of trying, he cracked it. There are now dozens of these lilies in our collection, and Kew remains the only place in the world where they are being propagated regularly and in large quantities.

Discover how Carlos cracked the code, along with a host of extraordinary stories of plant survival against the odds, in his book, The Plant Messiah. 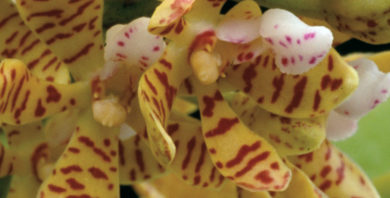 Found growing on trees and rocks of dry tropical forests on the island of Madagascar, the orchid Acampe pachyglossa has evolved thick leathery leaves and the same metabolism as cacti to cope with the dry conditions. They are found in almost every habitat on the island, from the coast to the highest mountain summit, and from the rain forest to the spiny forest.